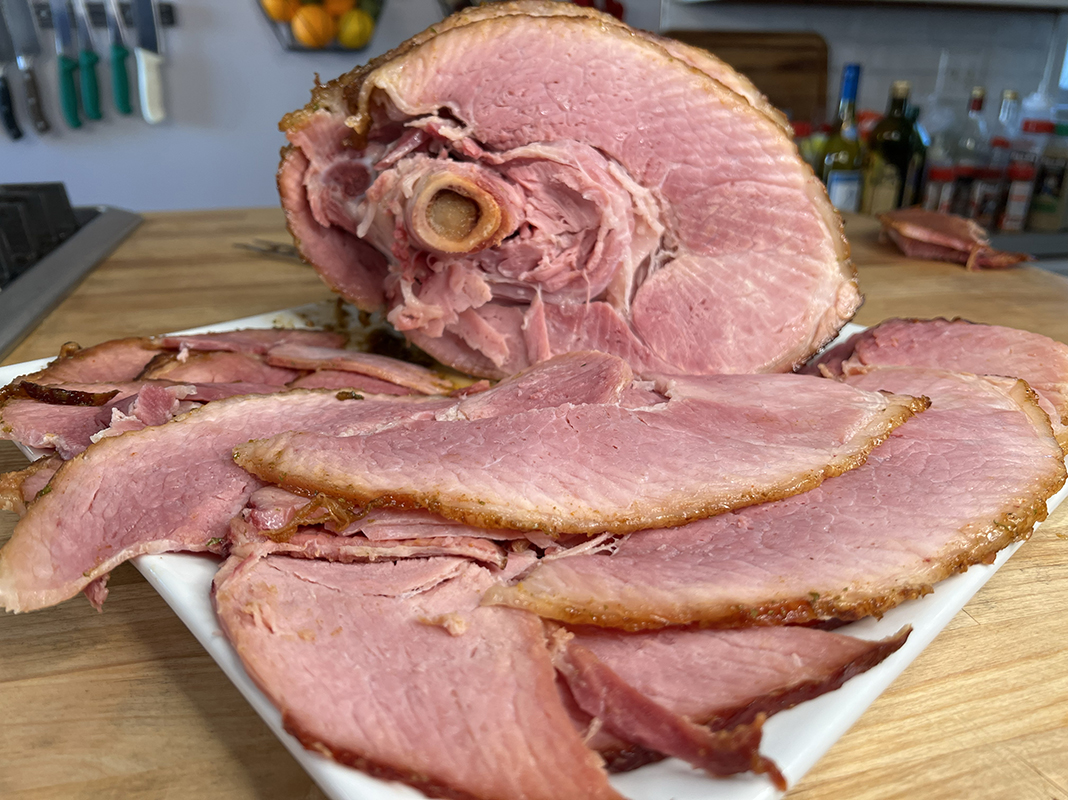 Ham it up this Holiday season with this Honey Baked Ham! This perfectly glazed, juicy piece of pork is bound to steal the show with every bite. The secret ingredient is Dan-O’s Spicy Seasoning which balances out this Honey Baked Ham’s sweet caramelized glazed. It adds just a small hint of heat to tantalize your taste buds and keep you wanting more. The best part is that it doesn’t take a lot of effort to make this, making it easier for you to spend time with your family instead of the kitchen.

History of Ham and the Holidays

Back in the 4900 B.C. in the land of China, someone cured the first pork leg and thus introduced Ham to the world. Ham would prove to become a hit across the world as it  diffused from China via European and Roman trade routes. The Gauls produced precursors to the world’s renowned black forest hams. It would be explorer Hernando De Soto’s 13 pigs that would become the foundational breeding stock of the US’s pork industry when he landed on the coast of Florida sometime in 1539. Shortly after he landed, those 13 pigs would become 700. Those numbers kept growing from there.

By the early 17th century, a lot of colonial farmers raised pigs. Mostly due to the fact that salted pork and bacon’s incredible shelf life made them both staples in American kitchens. While the working class were enjoying their salted pork and bacon, it was the upperclass’s hams and pricer cuts that would lead to the expression “high on the hog”. This referred to the position of ham on the upper half of the pig, eventually coming to mean a luxurious lifestyle of dining on the finest meats. Flashing forward In 1926, Ham would be canned by George A. Hormel & Company. They would later introduce Spam in 1937 as luncheon meat.

Sometime in 1944, we started designating Hams as “country” and “city”. Country ham refers to a method of dry-curing and smoking developed in more rural regions. While City hams were typically wet-cured with brine, then smoked. City ham were almost always fully cooked, and spiral cut as well.

City Hams would eventually include Honey Baked Hams, with those classic spiral cuts being paired with a signature sweet crusty glaze. You can thank William Hubenet’s Honey Baked Ham Company for them.  But it would take a man named Harry John Hoensellar to revolutionize spiral cut hams and push Honey Baked Hams into a national name.

The Modern Honey Baked Ham Story starts back in the mid 1920s, when Harry headed from Cheboygan, Michigian to Detroit. Here, he would find work as a salesman for the Hubenet’s Honey Baked Ham company. During this time, bone-in hams were being cut by hand. A sluggish process and took a lot of concentration and talent, something Harry demonstrated a knack for.

Over the course of 10 years, Harry would try designing a machine to automate the process and finally. In 1938, he had a working prototype. One that you’d find in most Honey Baked Ham stores to this day. He filed for a patent in 1944, and finally secured one in 1949. It was Harry’s belief in his machine that motivated him to search for a buyer. However, Harry would end up being the buyer he was searching for. In 1957, following WIlliam Hubenet’s death, the Honey Baked Ham company was inherited by his widow. The widow, having no interest in the business, offered to sell it to Harry for $500.  Harry couldn’t pass the opportunity up, and remortgaged his home to complete the purchase. He would open the first doors of the first modern Honey Baked Ham store in October that same year. The next 60 years would be spent turning Honey Baked Hams into a national Holiday favorite.

How do I store my Honey Baked Ham leftovers?

Store refrigerated in an airtight container, and try to consume it for about 5-6 days. You can always freeze the leftovers.

What type of Ham Should I buy for Honey Baked Ham?

As long as it’s fully cooked spiral cut, the choice is up to you. As long as the ham is high quality, we don’t really care if it’s bone in. Though it is nice because the bone can add some nuance.

Should I bake the Honey Baked Ham covered or uncovered?

Definitely cover it with foil, if you don’t your ham will dry out! You can add a cup of water to the bottom of your roasting pan to keep everything nice and moist.

Should I serve my Honey Baked Ham Hot or Cold?

This also comes down to personal preference. If you want to serve it hot, serve it hot. If you want it cold, let it rest for a bit out of the oven before putting it in the fridge to cool down more.

How long do I cook my ham for?