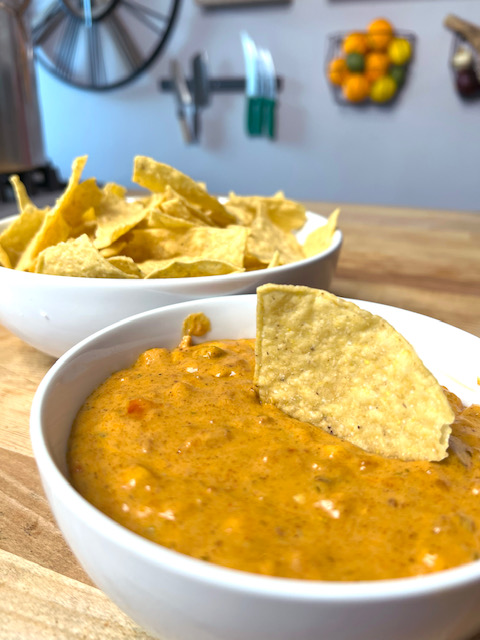 A great Cheetah once said, “it ain’t easy being cheesy” but that Cheetah clearly never had Dan’s Famous Loaded Chorizo Cheese Dip. This is the perfect dip for game day, it makes a huge batch and it won’t last because people will keep coming back for “one more bite”.  Not only is this dish plenty cheesy, but it’s got a nice kick of heat to it with the Dan-O’s Hot Chipotle, Jalapenos, and Chorizo Fresco.

Part of what gives this cheese dip such a unique flavor besides the Dan-O’s Hot Chipotle is the Chorizo Fresco. Chorizo is a type of pork sausage originating from the Iberian Peninsula. Don’t get Spanish Chorizo and Portuguese Chouriço twisted though, they’re very different despite both smokiness and deep red color from dried, smoked, red peppers. We’re going to focus on the Mexican version of Chorizo, which is made not just out of fatty pork, but a variety of proteins like beef, venison, turkey, and tofu. There are also kosher and vegan options available, making it one versatile protein!

A distinct quality of Chorizo Fresco is that it’s usually ground as opposed to chopped and uses more native seasonings. It’s not often found in Europe. Mexican Chorizo is typically made with native chili peppers of the region making it spicier than other varieties of Chorizo. Most Chorizo Fresco you have to cook before eating, and it gives a mouthwatering aroma.