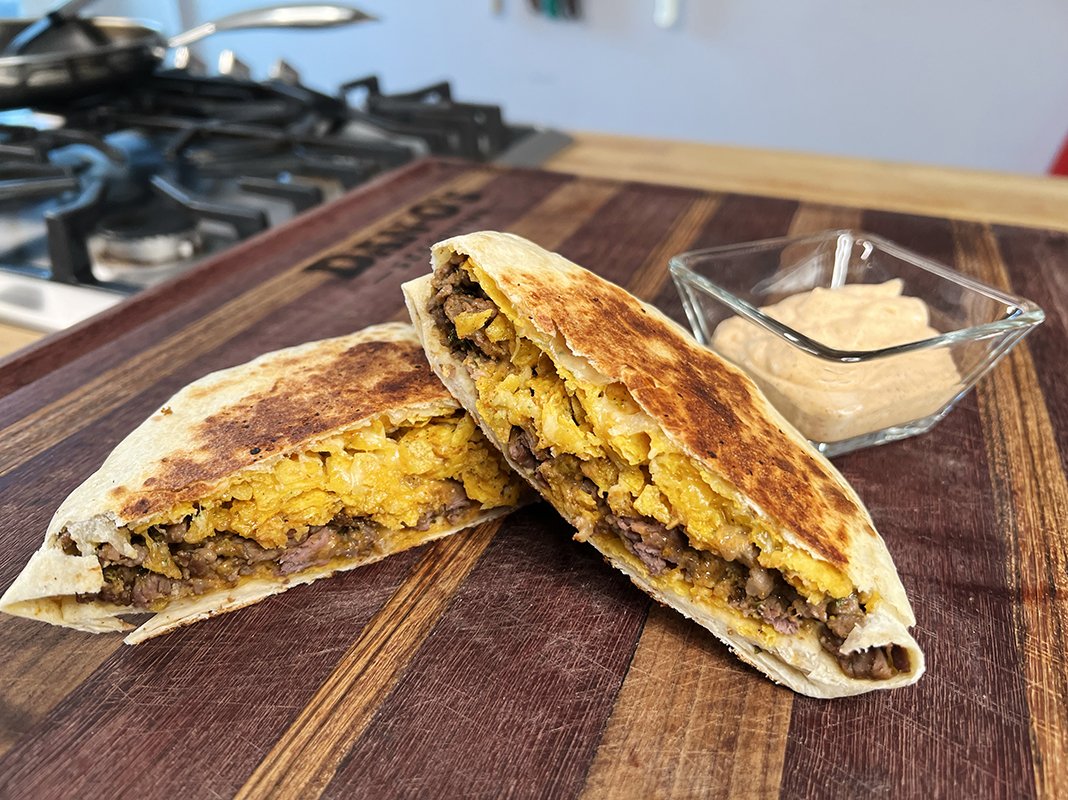 A Gourmet Take on a Fast Food Classic

If you love Taco Bell and you love Dan-O’s then this Cheesy Sirloin Steak Crunchwrap is just for you! This is a riff on the classic Crunchwrap supreme but we use Sirloin steak and a spicy crema sauce for a new world of flavor. If you’re worried about this dish being too spicy, don’t worry Dan-O’s Spicy only adds a lil’ kick of heat to tantalize your taste buds while Dan-O’s Chipotle offers a smokey taste that satisfies. If the Sriracha is too much for you, you can always use a little less to make it more manageable.

When it comes to dicing, everyone’s version differs. Some people are more rustic with their dice varying all over the place, while others are more precise. In the professional chef world, there’s 4 standard dices: Large (¾ an inch), Medium (½ an inch), Small (¼ an inch), and “brunoise” (⅛ an inch). For this recipe, we’re looking for a small to medium dice. It doesn’t have to be perfect but the smaller cuts will help the sirloin cook faster and make it easier on you to do the filling of your Sirloin Crunchwrap.

Most of the heat for this dish comes from the Siracha with the Dan-O’s Spicy only adding a gentle kick. Sriracha is a type of hot sauce made from a paste of chili peppers, distilled vinegar, garlic, sugar, and salt. It’s often associated with Asian cuisine but it’s pretty universal. However, Sriracha is having a universal shortage right now due to a failed chili pepper harvest in Northern Mexico.

If you can’t find yourself a bottle of Sriracha, don’t fret! You can easily substitute another quality hot sauce and get a similar result. Tabasco is one of the most popular substitutes but we’re partial to Melinda’s Thai Sweet Chili Sauce and Cholula Sweet Habanero Sauce.

How much filling should I add for a Sirloin Crunchwrap?

Less is more when it comes to filling a crunchwrap because if you overfill it then it’s hard to fold up and stay together.

How do I fold a Sirloin Crunchwrap up?

Can I make this Sirloin Crunchwrap a supreme?

Half of cooking is experimentation, feel free add anything that you think would taste good with this Sirloin Crunchwrap! We’ve heard some people adding tomatoes and a little sour cream, while others have added some crispy bacon and black olives. Get weird with it!

An alternative is Creme fraiche with a bit of lime juice. It’s not a perfect replacement but it’s pretty darn close.