Indianapolis, IN - This past weekend, Ben Rhodes raced to the finish in the TSport200 at Lucas Oil Indianapolis Raceway Park (Lucas Oil IRP) in his No. 99 Dan-O’s Toyota Tundra TRD.

Indianapolis, IN – This past weekend, Ben Rhodes raced to the finish in the TSport200 at Lucas Oil Indianapolis Raceway Park (Lucas Oil IRP) in his No. 99 Dan-O’s Toyota Tundra TRD. This race marked the beginning of the Camping World Truck Series Playoff and the first return to Lucas Oil IRP since 2011. This razor-tight race had everyone watching as Rhodes faced off against 35 other drivers as they maneuvered and muscled for the top position. For the race, Rhodes’ No. 99 Toyota Tundra was fully decked out in a vibrant Dan-O’s Seasoning paint scheme.

Ben Rhodes finished in 2nd place just 0.477 seconds off race winner Grant Enfinger in the No. 23 Chevy Silverado. When asked about the close finish Rhodes said, “He(Enfinger) certainly had a truck to win, but I think our Dan-O’s Toyota Tundra was a lot faster than his truck. It’s a shame because I wanted to win the TSPORT 200 for my race team. This is their big event, and I just couldn’t get it done. I just need a few more laps and I know we could have got this Toyota Tundra into victory lane” (Speedway Digest).

“It’s too bad that we couldn’t get the win, but we’re still thrilled about the result. The whole team worked so hard for this and the car looked Dantastic!” said Dan-O’s Founder, Dan Oliver.

The truck received compliments from all around the paddock. During the telecast, even racing legend Phil Parsons said, “I like the way that No. 99 truck looks.”

With just 3 laps to go Rhodes was actually in 7th place. Where some drivers may have given up, Rhodes refused. He was able to quickly maneuver his truck up the pack in the last laps of the race. On the final lap, he was able to successfully overtake Zane Smith in the #17 Ford to get into second place and that’s where he would finish the race moments later.

“Everyone at Dan-O’s was so ecstatic to put this partnership together. We’re so proud of what Ben was able to accomplish!”

If you want to continue to follow along with Ben’s season, tune in to Fox Sports 1 next Saturday, Aug 13th for the Worldwide Express 250 in Richmond, VA. 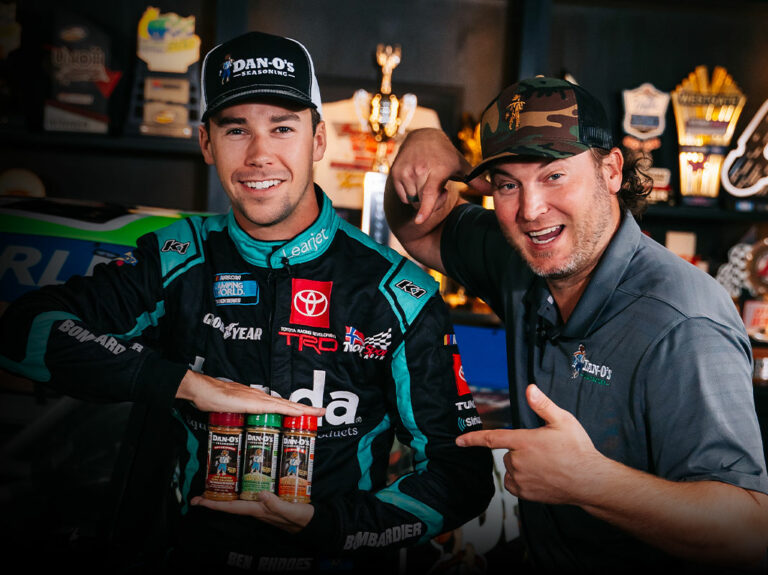