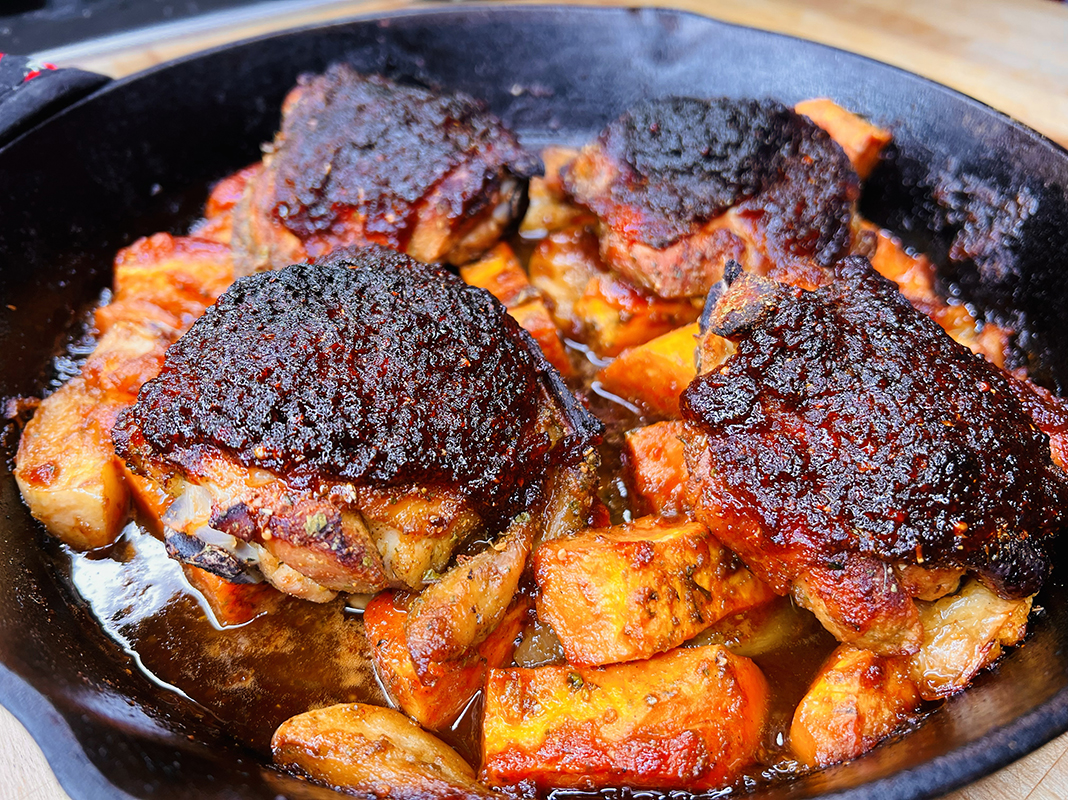 Unsure of what to do with your apple orchard haul? Look no further than this Apple Cider Glazed Chicken! This dish just screams Fall with its subtle apple flavor and gentle sweetness to the perfectly seasoned chicken to balance the savory. Sweet potatoes and apples round out the experience by giving some great texture and flavor. The skin has the perfectly slight crisp from the caramelized cider and honey, you’ll be wanting this all year long!

An History of Apple Cider

Wouldn’t be a Dan-O’s Recipe with a history lesson of some sort. Here’s a fun fact: Up until recent times, apples were often bitter to munch on. Instead of munching, people would press them for their juices, throw it in a barrel and let it ferment until it became boozy hard cider. Scaling back to early civilization, we know that the ancient Egyptians were growing apple trees on the banks of the Nile river but they weren’t fermenting cider as far as we know.

Moving forward through time to around 55 B.C. During this time,  the Romans were setting sail to the British Isles for the first time. There they discovered the locals were drinking apple cider and they quickly fell in love with it. This led to cider spreading through the Roman Empire and across Europe. Where it became especially popular with the Germanic tribes to the Normans, whose conquest of England in the 9th century helped bring more apple orchards to England and the word “Cider” into English language.

Europe wasn’t the only place that was cuckoo for cider, early colonists brought it with them to American colonies. Beer was proving to be more popular across the pond during this time, but the first settlers had a difficult time growing grains to brew. However, apples were easy to grow in New England and this led to Cider becoming the main drink of choice. Cider back then was boozy, and more often than not, safer to drink than the water available while maintaining its nutritional value. Kids weren’t left out, as a less alcoholic drink called “applekin” was produced.

This brings us to modern day, when Prohibition came about and wiped out a lot of American cideries for decades. However, ciders are starting to make a comeback across the country and helping keep history alive.

What Cider to use for Apple Cider Glazed Chicken?

This may seem like a kinda stupid question, but there is a difference in ciders. Treated cider is what most people are familiar with. This is cider that is pasteurized or has artificial preservatives added to extend shelf life. This process changes the sweetness, body, and flavor of the cider but overall, it’s the cider you know and love. Natural cider on the other hand is untreated. This means that natural raw cider is more tangy, and will eventually ferment. This initially adds some carbonation but given the time, it’ll turn to hard cider.

Of course, that’s just the nonalcoholic options. If you go with an alcoholic cider, not only will it tend to be sweeter but there’s a larger variety of flavors and the sort to give. At the end of the day, you can really experiment with ciders to get the best flavor for you. Personally, we went with some pasteurized cider from a local apple orchard and it led to some fantastic Apple Cider Glazed Chicken.

What are the best apples for Apple Cider Glazed Chicken?

You’re going to want an apple with crisp texture, and a sweet flavor. We prefer Fuji, but Honey Crisp, Gala, or Roma will also work. Fuji and HoneyCrisp are a little less sweet, Roma is something in between, and Gala is tops for sweetness.

What parts of the Chicken should I use?

We used thighs, but this recipe works well with really any bone in Chicken. You could do it with boneless chicken as well, but reduce the simmering time to about 15 minutes depending on the size of the meat.

Do I have to use local cider for Apple Cider Glazed Chicken?

You don’t have to but we highly recommend it. Not only to support a local business, but because we think it tastes better and leads to a fun trip!

My glaze isn’t as thick and sticky as I want, what do I do?

If you want your glaze for your Apple CIder Glazed Chicken, then simply mix up a slurry of a couple tablespoons of cornstarch with a touch of water. Now stir a tablespoon of slurry at a time into your sauce while whisking until your thickness is acquired. 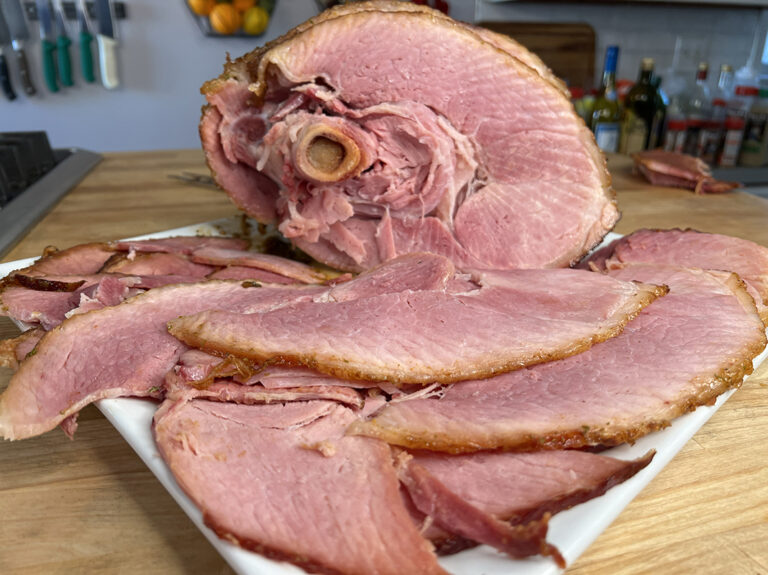