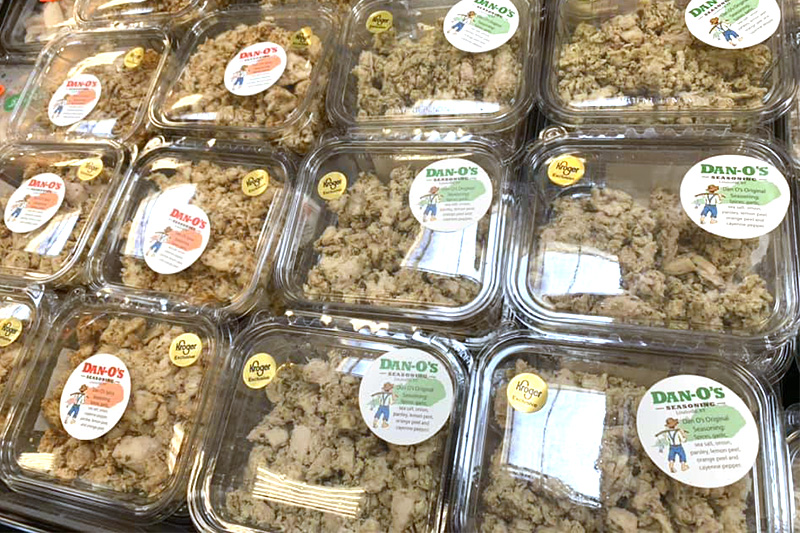 Louisville, KY (March 10, 2021) – For the past few years, Kentucky Kroger shoppers have been able to find Dan-O’s Seasoning on the shelves of the Kentucky Proud rack. This year, Kroger has added more Dan-O’s to the mix and the seasonings now can be found in places that are harder to miss: the Kroger deli and on branded product displays.

The new product displays and seasoned deli chicken started arriving in select Kentucky Kroger stores in early March 2021. This means Dan-O’s Seasoning’s home-state fans will have an easier time finding the seasoning and can even purchase pre-seasoned chicken for their weekly lunch and protein needs.

At the deli, Kroger is offering Dan-O’s original and spicy seasoned chicken prepackaged in roughly 1 lb increments. Since Kroger added the chicken to its deli, the Dan-O’s team has received a lot of positive feedback and excitement from its online fans, particularly those in its Facebook fan group, Dan-O’s Fan-O’s. In the group, the deli chicken announcement received the highest engagement of any post in the group’s history.

The new product displays are usually found near the meat and seafood department or in the seasoning aisle in the Kentucky-area Kroger stores. These hard-to-miss displays and larger quantities of seasoning have been great for some of the Dan-O’s Seasoning followers who have had a harder time finding it in the past. The Dan-O’s Seasoning team has always been grateful for its relationship with Kroger and looks forward to seeing how its shoppers take to the increased availability of Dan-O’s products. The team is also excited to have a place to refer its local followers to purchase seasoning while browsing one of the best selections of grocery items in the country.

If you’re in the Kentucky region and in the market for some new bottles of Dan-O’s Seasoning, check with your local Kroger first! And while you’re there, swing by the deli and consider adding some flavor-packed chicken sandwiches or salads to your lunch this week!