Louisville, KY – A few months back, local restaurant owner Lindsay Hack and her crew at Lindsay’s Kitchen introduced some Dan Good eats to their menu. We folks on the Dan-O’s team of course had to check it out and get the full story. Lindsay’s Kitchen is located on Cane Run Rd in Louisville KY, about a half-mile from the banks of the Ohio River. The restaurant is in a welcoming barn-style building that has a classic country feel with a big wrap-around porch. The food fits the look, as you can get a variety of classic Kentucky-style comfort dishes in a laid-back atmosphere when you dine in. Lindsay herself had worked at the location for years and served for the previous owners. Lindsay stuck with the business and learned the ropes, eventually getting an opportunity to take it over herself. Since then, she has made the business her own, built it up, and recently made the investment of purchasing the building. One of the ways Linsday made the business her own is by incorporating several family recipes passed down from her Grandmother. These recipes, along with some specials that came from her cook, Betsy, make for a great lineup of scratch-made classic country dishes. And if you ask her customers, everything on the menu is very good. Lindsay also made the business her own by choosing to offer second-chance employment to much of her staff, something she takes pride in as a person who has gone through recovery for alcohol. This allows Linsday to give back to the community while helping bring people up who have been through rougher times. Lindsay’s Kitchen is also a retailer for Dan-O’s Seasoning. They have large and small seasoning bottles available for purchase while keeping several Dan-O-Fide items on the menu. These items include some mouthwatering chicken wings, crispy fried cod; and two customer favorites, Dan-O’s Seasoned chicken livers, and grilled fish. Lindsay Kitchen keeps Dan-O’s on its menu as believers of the products and as a supporter of local business. Lindsay also has ties to Dan-O’s founder Dan Oliver, as he and her brother grew up together. After that, she met the company’s number one hype man (Toothpick Timmy) at Dan’s previous job. Dan-O’s has been in the picture ever since, and now you might even see Lindsay’s staff wearing co-branded Dan-O’s and Linsday’s Kitchen shirts in the restaurant! So, needless to say, the team at Dan-O’s is grateful to be featured at Lindsay’s Kitchen and is glad our seasoning helped bring some of us through the doors. Because many of us would be back getting our fix of down-home cooking even if we weren’t on the menu. Lindsay’s Kitchen can be found at 300 Cane Run Rd, Louisville, KY 40258 and their hours are 8:00 AM – 8:00 PM. Stop in to try out the Dan-O’s-seasoning items (or anything else) and check their Facebook Page to see the daily specials. 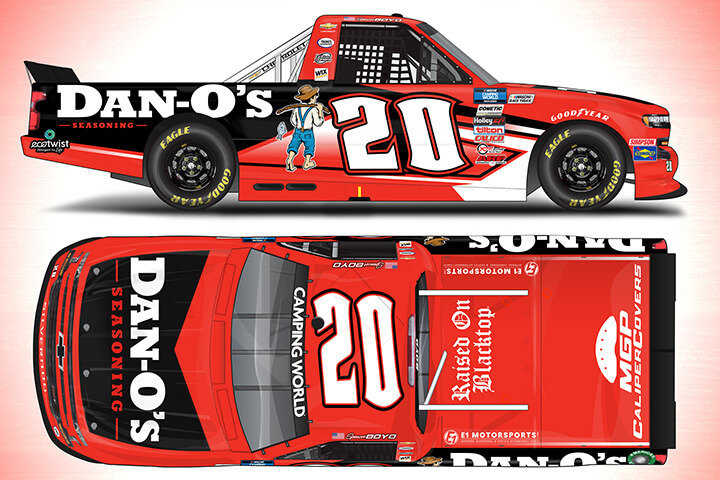 Dan-O’s Seasoning is pleased to announce that it will once again be a main sponsor for NASCAR driver Spencer Boyd in a Truck Series Race. This time, Dan-O’s Seasoning and Boyd will team up at the September 5th playoff opener at the historic Darlington Speedway in Darlington County, SC.  Fans of Boyd’s or Dan-O’s might recall that the two teams partnered up last August for a street course race at Daytona Speedway where Dan-O’s was the primary sponsor. This came to fruition after Boyd learned about the seasoning products via TikTok in the offseason. After that, Boyd’s team connected with the folks at Dan-O’s Seasoning, and the teams kicked it off from there.  Fans might recall that Boyd and Dan-O enjoyed some off-track time last year, including grilling out in Daytona, driving the track before the race, and racing go-karts. The Dan-O’s team attended the race and documented the whole thing, which you can see in a multi-part series on the Dan-O’s Seasoning YouTube Channel.  Boyd has stayed active with Dan-O’s in the offseason as well. Boyd, whose personal nutritionist recommends a lot of fish and chicken, approves of the seasoning – so Boyd often uses Dan-O’s to spice up some otherwise basic proteins. And as a lover of food, Boyd is also quick to hype up Dan-O’s recipes and cooking adventures on social media. There was even a Special Edition Spencer Boyd Seasoning Bottle made for him, which is still available on the Dan-O’s Website! Last year, the two teams went with a green truck wrap to represent the colors of the Dan-O’s Original Seasoning. This year, they will be spicing things up with a red color scheme to match the Dan-O’s Spicy Seasoning variant. Does this mean there will be some spicy special-edition merchandise this year? Stay tuned to find out!    It’s almost guaranteed that there will be some more off-track shenanigans with the Dan-O’s and Boyd teams in South Carolina come this June. There are even talks of Dan and Boyd cooking fan-submitted recipes and voting on their favorites for a grand prize. The team at Dan-O’s mentioned  they are all excited to get back to the race track and cook up some fun with Boyd.    Finally, to catch the race, tune in to NBC Sports on September 5th or visit the NASCAR website for tickets. To see the on and off-track fun, follow Spencer Boyd’s FaceBook or Instagram pages, or any of the Dan-O’s Seasoning social media accounts.